How i decided to go with Accutane

After some other people had helped me with some questions on a different part of the forums, I felt I should give back on my experience of taking Accutane over the counter for 5.5 months, as before I buy accutane and started taking the medication myself, I was keen to find out what other people had experienced throughout their journey, and the results they had achieved.

I started in November 2016, and finished in March 2017. At this point, I was 20, male, poor diet, lack of general care for myself, miserable, unhappy and so on, the general sort of feeling quite a few people who have moderate-severe acne have.

Throughout Months 1-3, I honestly did not experience any difference, I mean nothing, so I won't even talk about it.

Month 4
After the dosage was upped to 60mg/day, the side effects very quickly came around. In no particular order I experienced dry skin, and cracking of the cheeks, lips and nose areas. This was probably amplified and made worse with more poor skin care routine at the same, tied in with working in a kitchen for long periods of time, my skin was dry and cracking, yet caked in sweat and oil at the same time. It's also worth noting that my diet at the time was poor, lack of veg, and mostly processed 'crap'. How ever, my acne was improving massively.

This is where for most people, you have to consider if taking Accutane is worth it. Like I said before, everyone who takes Accutane has a different experience. But these 6 weeks, were nothing but misery despite my skin becoming 95% clear. The clearest it has ever been since before I hit puberty and things just went belly up. 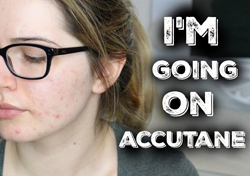 The side effects that I experienced..

Dry skin - The sides of my lips were cracking and bleeding, every day. The area around my nose was the same, cracking and bleeding regularly. Cheeks were dry, and felt tight, no matter how much moisturiser I applied. During the last 6 weeks, My entire arms, both left and right, dried up, cracked, became sore, and there was a rash there all the time.

Energy, or lack of - I was tired all the time, no matter how much sleep I could get, I felt lethargic, caffeine didn't help, nor did an increase of carbs within my diet. There was also plenty of days where I could just not get to sleep, I would toss and turn all night.

Mood - I didn't realise till afterwards just how bad of a mood I had been in, my staff would constantly ask me If i was alright, they all knew the medication I was taking, and I also informed my boss prior to taking the medication what could happen. I would blow everyone off, it affected my social life, and work life massively, tied in with the lack of energy and quite frankly will to live, I was a grumpy asshole. A few weeks after finishing Accutane, my boss and everyone commented how nice it was for me to be back to my normal self.

Bleeding - Nose bleeds at least 3 a week, and they were bad, they would go on for a few minutes and it was heavy too. I can't even begin to tell you how annoying this was at work. I know you don't want to hear it, but rectal bleeding, yep, it happened, not nice.

Headaches - I've not had headaches for years, since I switched soda/fizzy drinks out for water a few years back, and drink upwards of 5L a day, the headaches vanished, they soon came back and were horrible.

Suicide - Now I'm not going to sit here and say I directly thought about throwing myself off a cliff , but there were times where I was low, really low. I wanted to be alone, yet I felt depressed from having no social life, I didn't want to go out because I looked like shit, cracked skin, bleeding, etc etc. it's a vicious circle, and arguably I should have stopped taken Accutane sooner and spoken to my Dermatologist. But I didn't want things like this being recorded on my medical record, as I had hoped to join the Army (and still do), things like this on a medical record just cause problems and make people ask questions later down the line in training.

The outcome, I became 95% clear, the day I finished Accutane, I started a new diet and exercise regime, I eliminated all processed foods, dairy and gluten, ate a truck load of veggies, and plenty of water each day. I did this for 3 months, till June 2017. During this time, my skin remained clear, the occasional pimple, but hell, that was amazing in comparison to how it used to be. I was healthy, and quite frankly enjoying life.